10 Travel Friendly Vegetarian & Vegan Food To Bring Around The World

The Maasai called the plains of Serengeti National Park “the place where the land moves on forever”—so prepare to be astonished by its vastness. And in Serengeti, you can witness the famous Serengeti annual migration, the largest and longest overland migration on earth.

Over here in Serengeti National Park, due to it’s large vast piece of flat plain terrain, it is absolutely easy as it is to spot an animal or wildlife. Here are some of the amazing animals we have captured in Serengeti. Like what my brother said ” Gotta catch them all – Pokemon” haha was an amazing experience.

Didnt manage to complete my Big 5 Mission in South Africa last year! Only managed to see a dead Leopard in Botswana!

This time, we managed to catch 2 Leopards on a same day (separate occasion of course) in Serengeti National Park, Tanzania! I asked my driver what’s the odds of seeing a Leopard, he said we were very very very lucky to see 2 leopards on a same day! usually people can’t see any leopard, and it is the hardest of the big 5! 20% chance of seeing a leopard in a national park! 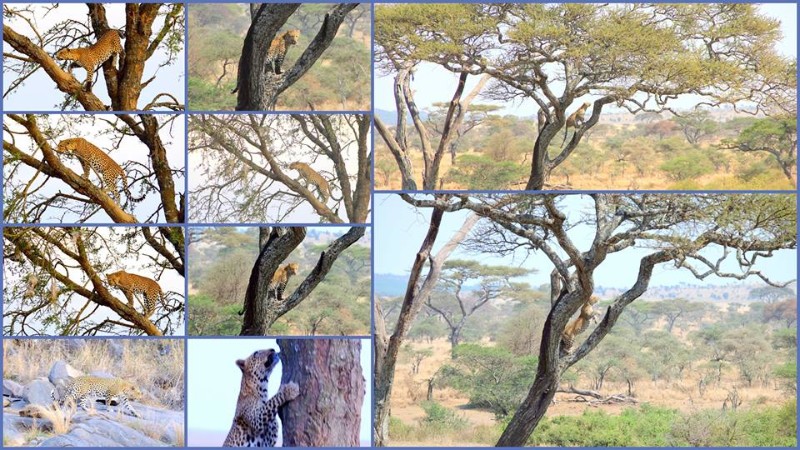 We are truly blessed and fortunate! Well, exchanged with our patience cos we spent about 1 hour to 2 hours waiting for each leopard to show up after seeing the kill on the tree! We also had a strategy to lure the leopard out, by driving away and come out with a sudden surprise! haha

Experience only in Africa!

2) The Pride of Lions & Lioness + heaps of them

Wanna make a guess which one is male and female? haha

Yes, I give the benefit of doubt you are smarter than me…. the colorful one is the male! 🙂 Yay… 1 point for male species in the world! haha

The warthog is a wild member of the pig family found in grassland, savanna, and woodland in sub-Saharan Africa. The Tanzanian called it Pumbaa (Timon aka Mongoose’s friend – The Lion’s King Movie) and my driver and cook will follow with Hakuna Matata (means no problem). Due to a famous tee shirt prints with a picture of Pumbaa and tagline Hakuna Matata… some tourist thought the African name for Warthog is Hakuna Matata. haha

Dung beetle is a beetle whose larvae feed on dung. Dung beetles live in many different habitats, including desert, farmland, forest, and grasslands. They do not prefer extremely cold or dry weather. Dung beetles eat dung excreted by herbivores and omnivores, and prefer that produced by the former. Many of them also feed on mushrooms and decaying leaves and fruits.

Somehow, my brother is in love with the dung beetles! haha He said the dung beetle is an amazing creation in life. They live in the dung and eats the dung but still stay happy and healthy in the dung! 🙂 So perhaps the philosophy is to always be happy even you are in deep shit! haha I’m just kidding. 🙂

Seeing the creature means you will have to look for dung and smell it! 🙂 Good experience I would say… haha

I am kidding again. They are no petrol kiosk but just a simple station for trucks and vehicles to refill the gas or petrol.

Even though Serengeti’s terrian has a vast piece of flat plains, it is still not as easy to spot the Cheetahs, especially they could easily camouflage into the large piece of Savannah. Though they are the fastest animal in the world, their hunting skills required them to stay close to the animals due to lack of stamina.

Alright, enough on dung beetles and carnivorous! I am a herbivore so must be excited about my same kind! haha

It’s time to build our shelter – camp tents next to a Mongoose house! haha Who can proudly say their neighbours were the mongoose for 2 nights in the wild? Staying near such great neighbours also keeps you safe as the Mongoose fight snakes and you will ensure a safer bet next to them than anywhere else. Was an amazing experience sleeping in the wild as we heard many different animals howling at night. The hyenas, baboons, lions and buffalo! Everyone just keep still and quiet, nobody goes to toilet at night and no one makes any noise. Exciting as it sounds… still quite a scary experience! haha

There are more animals spotted in Serengeti, mostly are repetitive from Maasai Mara National Park, which I will keep it in a separate post tag to Kenya. Serengeti is such an unforgettable experience for brother Ryan and myself and a true safari experience. Only in Africa! 🙂

“Twenty years from now you will be more disappointed by the things you didn’t do than by the ones you did do. So throw off the bowlines, sail away from the safe harbor. Catch the trade winds in your sails. Explore. Dream. Discover.”- Mark Twain

How to spend a fruitful day in Dubai

The Great Annual Migration of Wildebeest at Maasai Mara

The Search For The Next Black Panther Tribe...

Journey to the Sahara Desert

Explore One of the Seven Natural Wonders of...

6 Reasons Why You Should Visit Botswana

The Great Annual Migration of Wildebeest at Maasai...

A Life Humbling Visitation to the Maasai Tribe

The Great Annual Migration of Wildebeest at Maasai Mara | KEXPLORER – MY WORLD TROTTING JOURNEY August 18 - 10:43 am

[…] We didn’t manage to catch any sights of Leopards, only in Serengeti, Tanzania. Read on if you wish to find out more on my experiences in Tanzania WHEN NAT GEO ALWAYS SAYS…. THE SERENGETI NATIONAL PARK. […]