A Life Humbling Visitation to the Maasai Tribe

The Maasai people of East Africa live in southern Kenya and northern Tanzania along the Great Rift Valley on semi-arid and arid lands. The Maasai people occupy a total land area of 160,000 square kilometers with a population of approximately one half million people. Many Maasai see the national census as government meddling and often miscount their numbers to census takers. The actual figures could be even higher.

Visiting the Maasai tribe can be a life humbling event for me. I had interactions with the people and could really feel and appreciate their sincerity and contentment even in such poverty simple life,

Such feelings, is hard to describe the interactions I had with them!

Sincerity is the key which will open the door through which you will see your separate parts, and you will see something quite new. 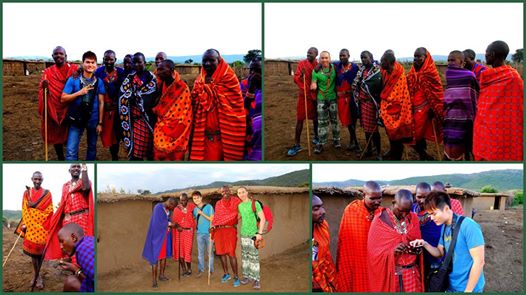 1) Playing with the beautiful kids

The warrior is of great importance as a source of pride in the Maasai culture. To be a Maasai is to be born into one of the world’s last great warrior cultures. From boyhood to adulthood, young Maasai boys begin to learn the responsibilities of being a man and to be a warrior. The role of a warrior is to protect their animals from human and animal predators, to build Maasai homes and to provide security to their families.

Through rituals and ceremonies, including circumcision, Maasai boys are guided and mentored by their fathers and other seniors on how to become a warrior. Although they still live their carefree lives as boys – raiding cattle and game hunting, a Maasai boy must also learn all of the cultural practices, customary laws and responsibilities he will require as an elder. 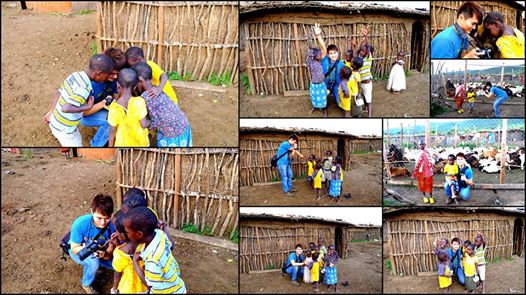 Interactions with the Maasai Tribe Children

This part of my experience almost make me teared! Along the journey, I saw many beautiful kids, running or walking along the road of Kenya and Tanzania… most of the times, I felt like celebrity cos the African kids were soooo adorable… they ran towards the vehicle just to wave hi and smile at you!

The only opportunity of interactions with them was when I visited the Masaai Mara Tribe in Kenya. The kids were sooo innocent and adorable! Probably because being an uncle of my 5 monster at home (uncle of 4 nephews and 1 niece), I was able to hit off well with the kids easily!

When I first saw the kids, they were so innocent, and soooo happy! Although they have no toys, no clean beautiful clothes but their smile is always there for you! Something must be really keeping the kids happy… well I guess… Simplicity is the ultimate sophistication and hence keeps them happy! Singapore kids do not run to strangers with a smile… even if u give them iphone, ipads, handheld game sets and expensive toys…. always a problem, sometimes also tough to make them greet adults as well aye? But not so much of a problem for the well mannered African kids! So, I wonder myself… whether Singapore kids are happier or the African kids? Bear in mind, the only things that the African kids have were the irritating flies that we all hate back home…so many flies were on their faces! Such poor condition and they already lived with it…

The flies we hate, live on the faces of the children

2) Educational tour of how the Maasai tribe live

As a historically nomadic and then semi-nomadic people, the Maasai have traditionally relied on local, readily available materials and indigenous technology to construct their housing. That is using cow dungs to build their houses. The maasai tribe depends on the women to build the house and it will takes about 3 months to complete it. While the men will be in charge of running the cattles or sheeps (livestocks) and earn money for the family.

The material to build their houses – cow dungs

Livestock means money to them

3) Listening to the tribal songs and dances performed by the women and men of the Maasai tribe.

Each young man will jump as high as he can while the others stand in a circle and sing. The voices of the men get higher as the jumping increases. In the Masai language, this dancing competition is called the “adumu”.

Though the jumping dance is the most unusual and best known, there are plenty of other traditional dances that the Maasai perform. Maasai dances are very structured and are performed for certain occasions.

There are dances for celebration:

Most of the Masai dances are pretty simple, and consist of a lot of bending, but with the feet staying still on the ground.

Women of the Maasai tribe peforming a celebration song

The higher you jump, the more share you will bring home for your family

4) Watch how they setup fire (without matchsticks and stove)

The Maasai tribe men taught me how to setup a fire using nature’s tools. It was amazing to watch how easily they can set the fire up within minutes. All I know that was a free method, guarantee government will not tax you for that! haha

How they setup fire without stove and gas

Free use of fire

It doesn’t take more than 5 minutes

Maasai tribe demonstration of setting up a fire

5) Finally, a glimpse of their house interior

Since the Maasai lead a semi-nomadic life, their houses are loosely constructed and semi-permanent. They are usually small, circular houses built by the women using mud, grass, wood and cow-dung. While the men build the fences and sheds for the animals. The Maasai Tribe moved every 9 to 10 years due to termites, to a nearby territory not more than 5 kilo-meters away.

You will be surprised how they use simple physics and natural cooling “technology” in their houses by the Maasai. They do not have big windows in the house, but rather a small “hole” to prevent smaller predators or scavengers to enter the house such as snakes, hyena, jackal or etc..

Based on simple physics, using fire in the small enclosed house is also possible, the smoke from the incomplete combustion will automatically channel out of the house through the little hole (window). In this way, they can prevent mosquitoes from getting into the house as well.

A family of Maasai

Small window to prevent snakes, hyena or even small, medium predators to enter the house

Back at exterior of the house

A small entrance to the house, prevent bigger predators to enter

The Maasai warriors and people are very friendly and sincere. To be honest, I was a little worried and skeptical before visiting the Maasai tribe, thinking what sort of culture and people I will be seeing? After the visitation and interactions with the tribe. I learnt what is mostly lack of in a well developed society of ours – contentment! Fortunate children will never be contented with their toys and always demand for more… adults will always have our own greed that will never be fulfilled. The Maasai live and lead a simple life, with no expectations from government and outside world. I asked the tribe chief, do Maasai people wish to migrate into the city and live there? He answered “No, we are born here and we will live our life here. It’s beautiful here isn’t it? No government, no taxes and no restrictions”.

A young Kenyan man, Joseph, whom I met in a old small souvenir store, told me this “Yes, we are poor but I always thank god and know god has a reason for giving me life like this in Kenya. I’m still thankful to God for giving me a healthy hands to work hard for my family and myself”. After listening to him, I felt I’m much weaker as compared to the him, because if we ever put into such situations… I don’t think I will be as tough as him??? Perhaps? I don’t know…

With Joseph, a young Kenyan who gave me a good lesson in life

Visiting the Maasai tribe opened my mind and gave me lotsa inspiration. They showed me what is contentment, what is satisfaction and i learnt the general formula from them “The more simpler life you lead, the greater contentment you will lived”.

No man with a complex life can be happy! The simple secret of the happiness is simple life! Live a simple life; you will own the most beautiful treasures of the world! 🙂

Life isn’t what is given, it is what we can create and build! 🙂

The Search For The Next Black Panther Tribe...

Journey to the Sahara Desert

Explore One of the Seven Natural Wonders of...

6 Reasons Why You Should Visit Botswana

The Great Annual Migration of Wildebeest at Maasai...

Is very ‘live’ like What they show on the TV screen program. ….hardly any Singaporean will venture n interact with local just like the celebrities did.

Very nice article with some nice pictures. It really reminds you how spoiled we are here in the USA.

Thanks, yea we must not take life for granted. Majority of the people in the world do not have an easy life as compared to many developed nations. Happy new year and may 2015 be better year for everyone! 🙂