6 Things to do in Reykavik, Iceland

by Keith Yuen August 17 0 comment
People always relate Iceland as cold, boring, and mysterious place in earth. True to a certain extent that Iceland is cold (not as cold as you think) and mysterious due to the rich land forms caused by the volcanically and geologically active nature. But Iceland is never a boring place! The only way for you to get into this amazing piece of land is via Reykavik, the capital city of Iceland, home of two-third of the entire Icelandic population!
Before you submerge into the beauty of Icelandic fields, plateau which characterized by lava, sands, mountains and gorgeous glaciers, you will find many interesting things to do in Reykjavik, the northern most capital city of the world! Here are the 6 you mustn’t miss out:

Hallgrímskirkja Church is Reykjavik’s main landmark that you surely won’t missed (unless you are not in the capital for some reason). It’s tower can be seen from almost everywhere in the city! 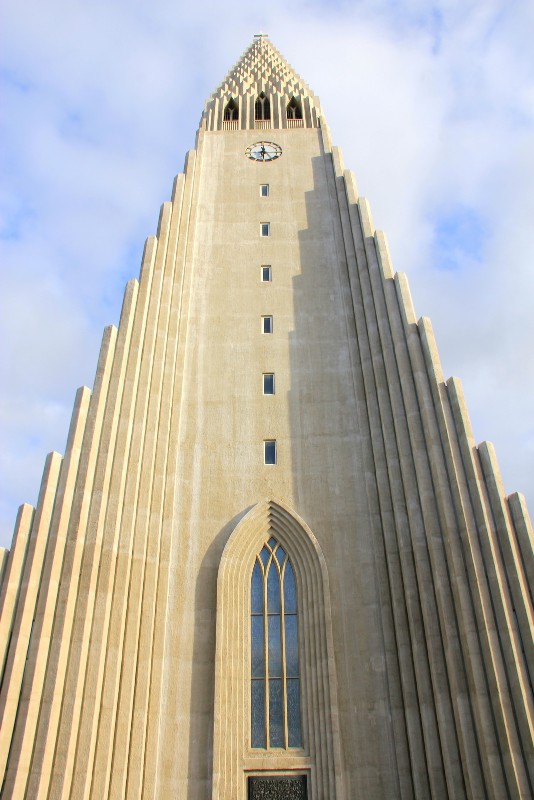 The church stands on a hill, Skólavörðuholt, which is situated in the center of the city and is visible from all over Reykjavík and surrounding areas, making it a great landmark. 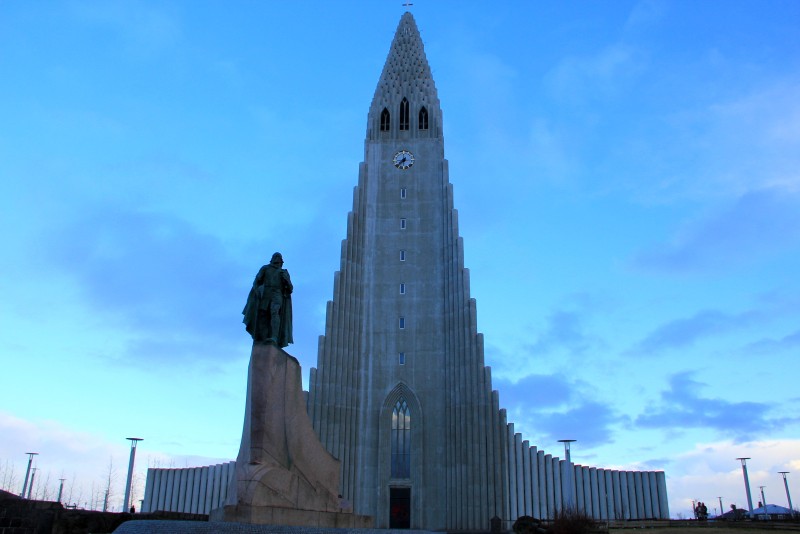 The tower with the observatory is open every day from 9 am to 5 pm. The price is 400 ISK for adults and 100 ISK for children 7 to 14 years old. You buy the tickets from the church-shop on the left hand side inside the church. The view is breathtaking, you can see all of Reykjavík from it really, the Atlantic ocean, the mountains, the mountain Esjan being the closest to Reykjavík. The church bells rings every 15 minutes so be aware of that. From time to time the church bells play tunes, which is really lovely. 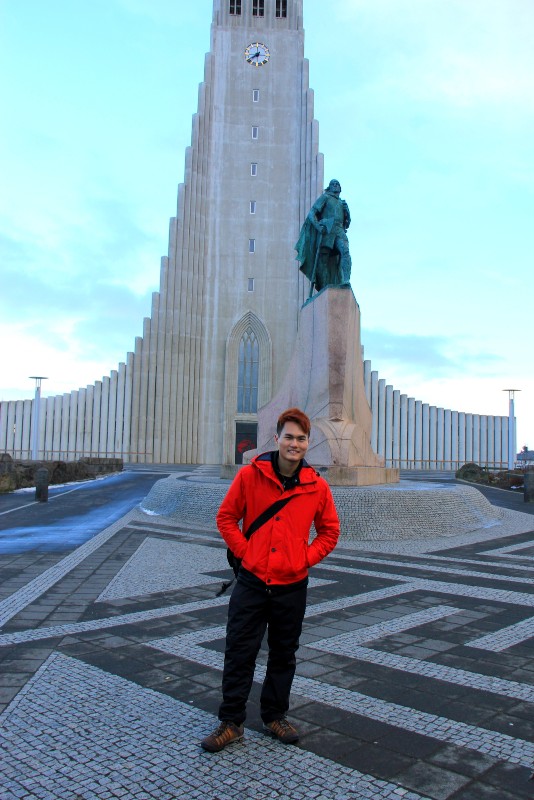 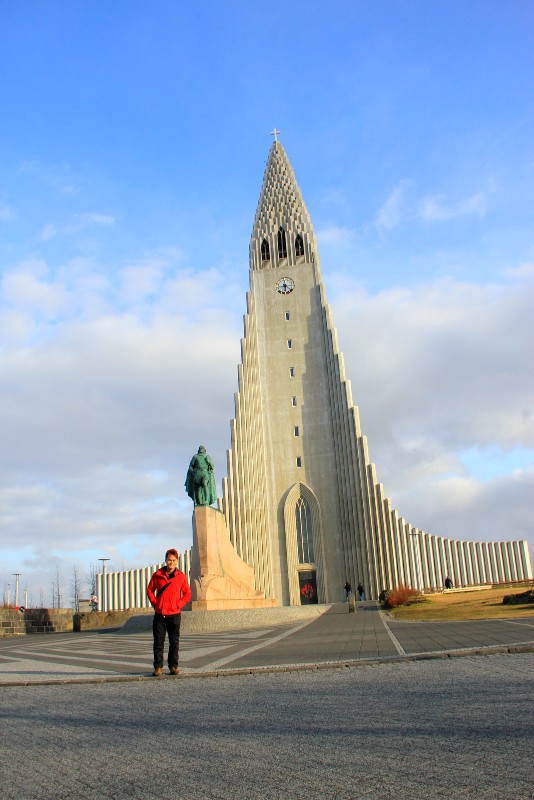 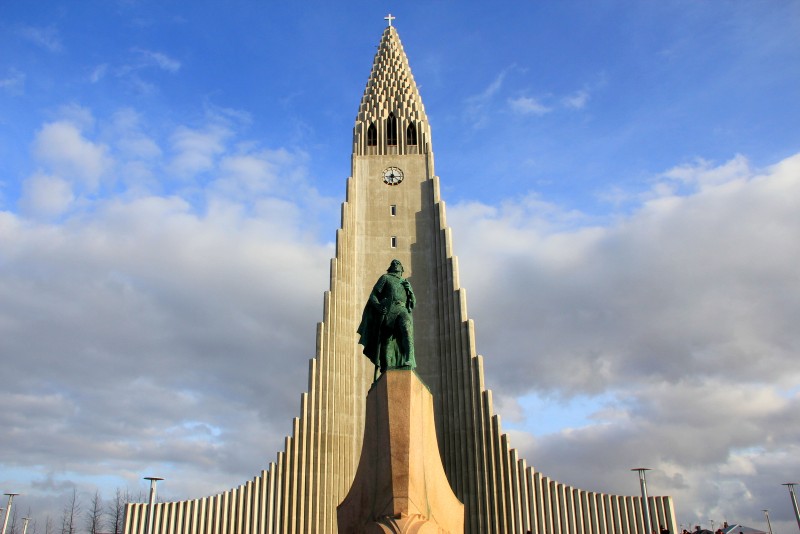 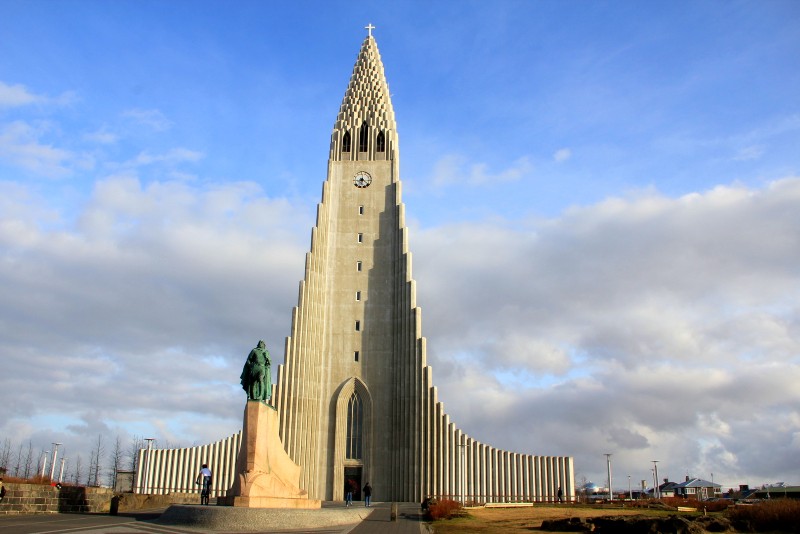 Located by the old harbor between Reykjavík city center and the North Atlantic, it stands out as a unique landmark in continuous interplay with its surroundings. The design was influenced by Iceland‘s dramatic nature. Situated on the boundary between land and sea, the building is a gleaming sculpture reflecting both sky and harbor, as well as the vibrant life of the city.

I was blown away by this building. Quirky, futuristic design on the outside; art, culture and shops selling unusual design on the inside. Fantastic cafe with fabulous cakes. Wonderful views of the harbour. Sophisticated, stylish and every superlative you can mention. 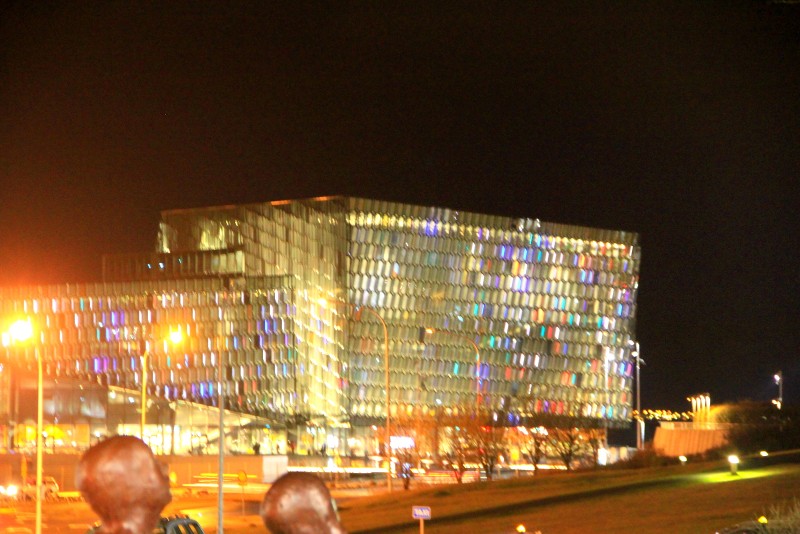 Sun Voyager is a dreamboat, an ode to the sun. Intrinsically, it contains within itself the promise of undiscovered territory, a dream of hope, progress and freedom. Indeed this gives you an idea how magical Iceland is and you will be surprise Icelandic people are superstitious and superstition has remained an important part of the nation’s culture since the island’s settlement. 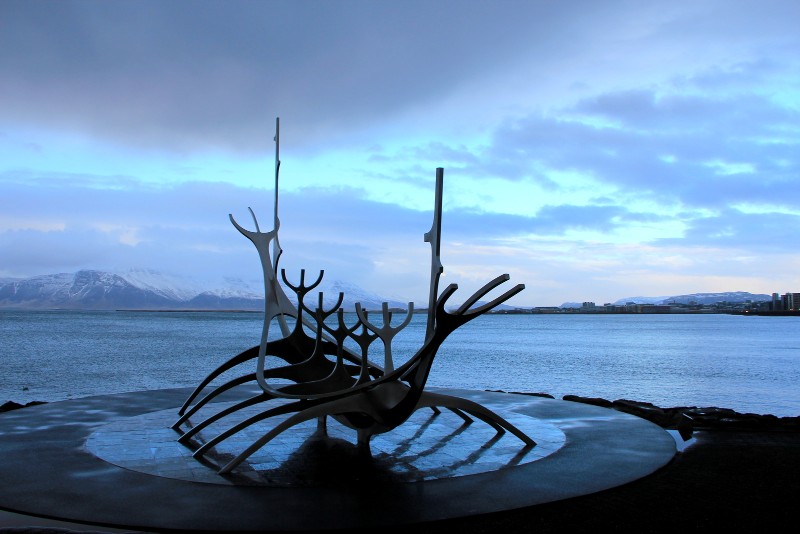 Walk along the old harbor in Reykjavik, past the Harpa concert hall, and you come to what looks like the skeleton of a Viking ship, facing east. You’re at the Sun Voyager, a beautiful view point. The only thing that spoils it is the traffic whizzing by at all hours of the day and night. 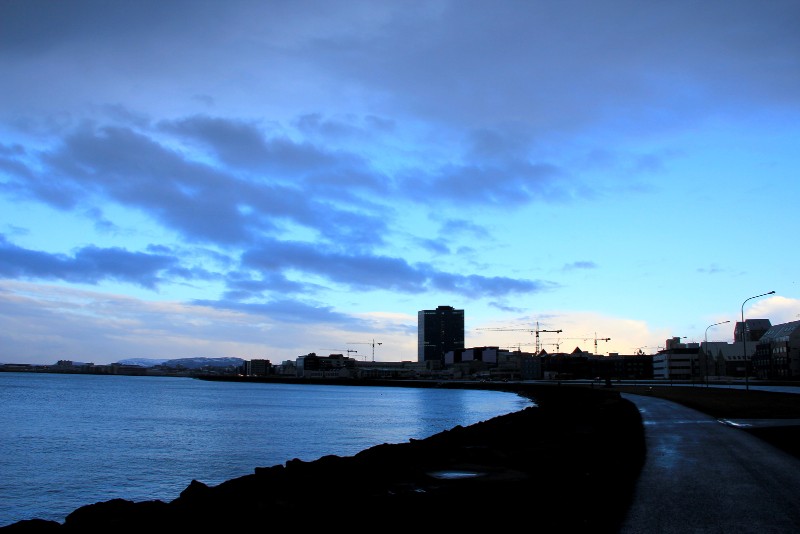 It was my first day in Reykjavik and I decided to do my first KJS in Iceland! 🙂 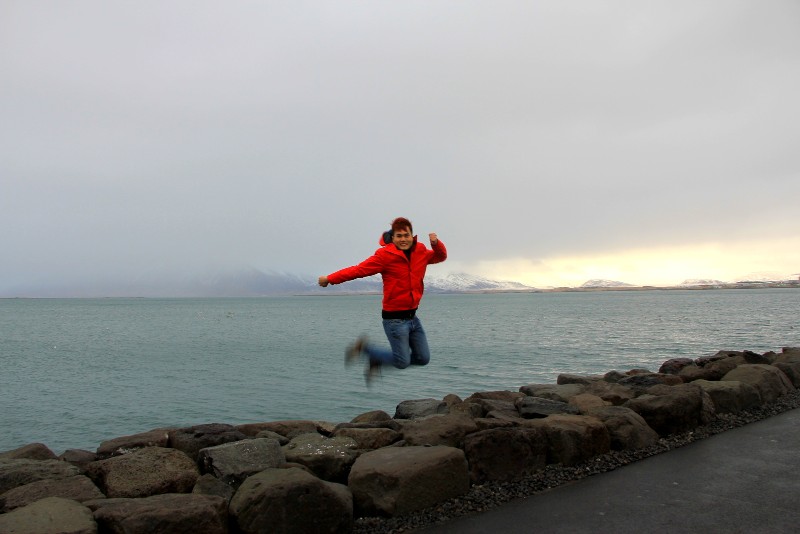 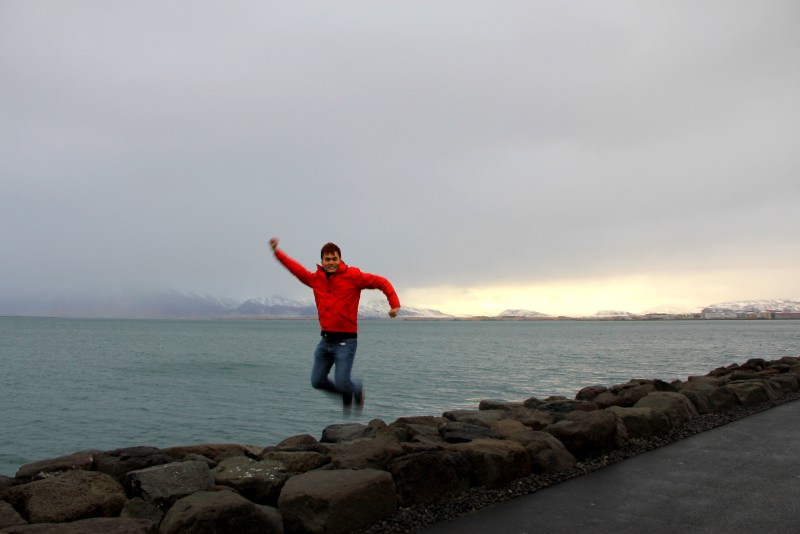 Well consider my luck to get someone to take this amazing Iceland KJS for me! More to come…

Laugavegur is the major commercial veins of downtown Reykjavík, Iceland and one of the oldest shopping district. The name derived from”wash road”, as it used to lead to the hot springs in Laugardalur where in olden days the women of Reykjavík took their laundry for washing. 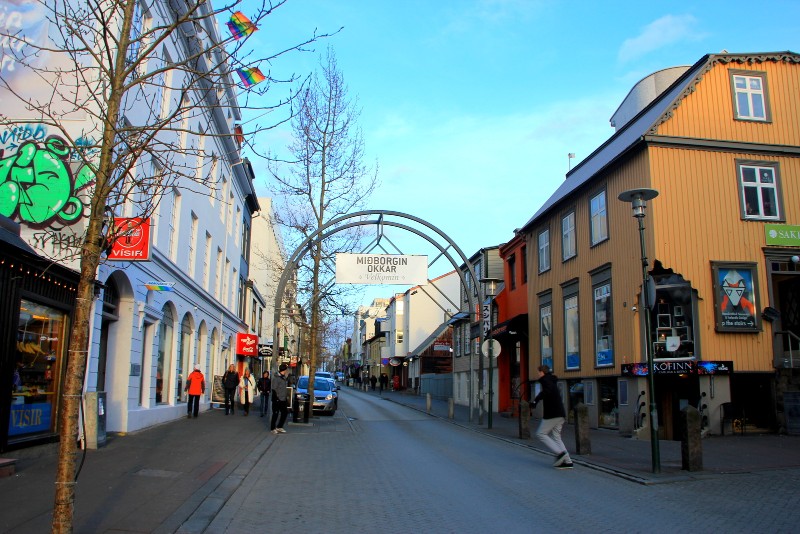 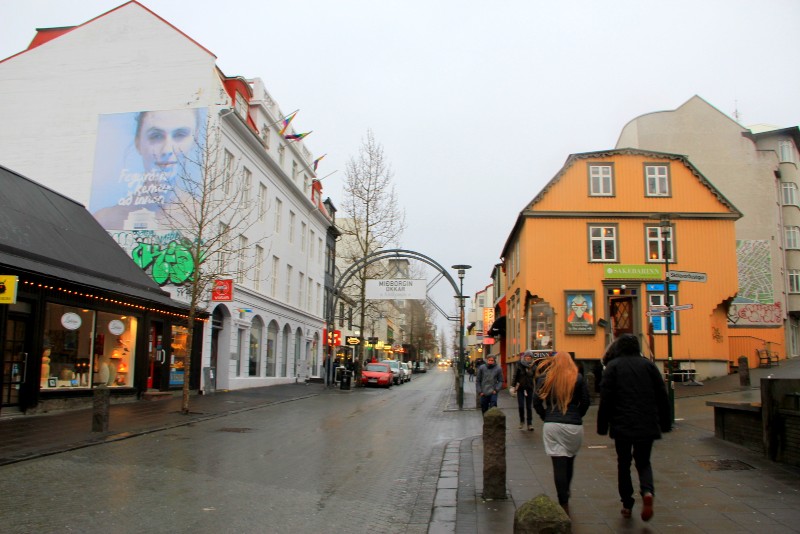 This is the main shopping street in the city. It started out out as Bankistraeti and as you go up the hill away from the old town it turned into Laugavegur. The shops range from high fashion to dollar stores to fine home furnishings to kitchen gadgets. There are many vegetarian restaurants at the bottom of the street and they were awesome. A place filled with interesting shops and restaurants and very friendly people. 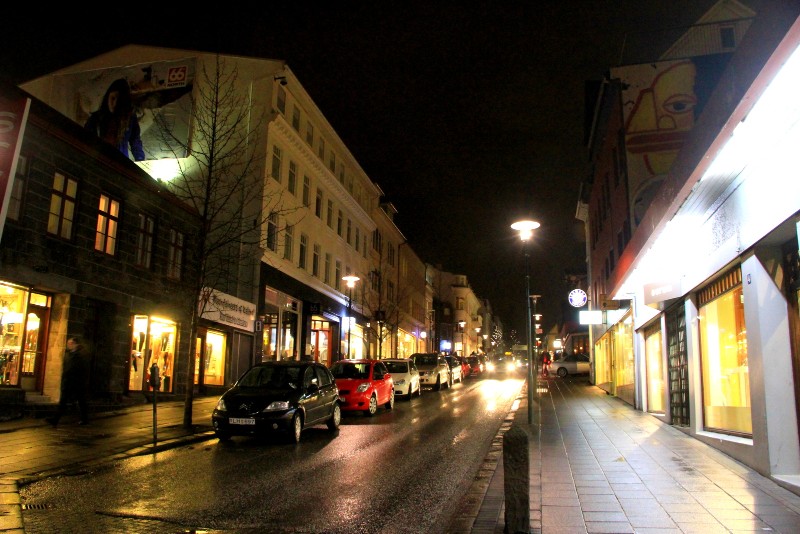 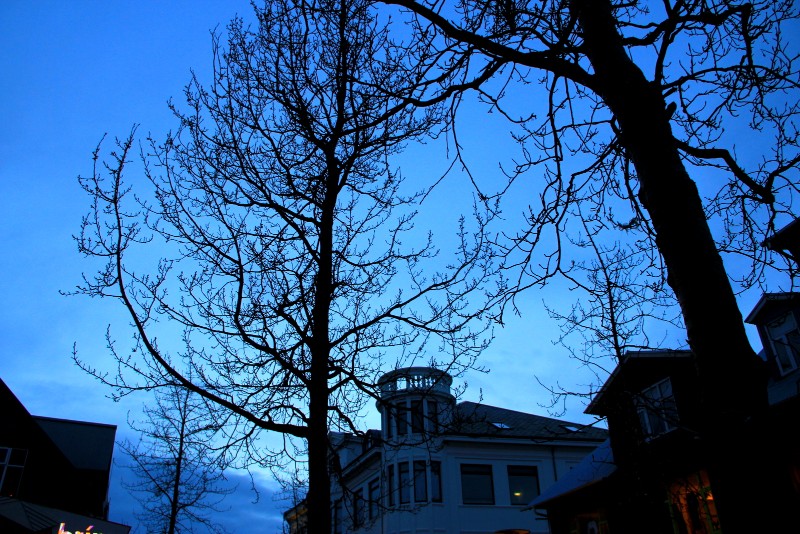 As shopping streets in most capitals go, it really has not much to offer, other than a special little charm and a few really nice restaurants and coffee houses. Prices are on the expensive side, but then don’t forget you get tax-free refunds when flying out. Don’t forget Iceland is still part of Scandinavia, so as the price as well! 🙂

5) The Vegetarian Options in Reykjavik

Is the only restaurant that serves raw food, but they also serve some cooked food. Note their website is only in Icelandic. Very centrally located restaurant on the first floor. Largest of the local veggie spots. The wrap I had was fantastic as were the salad choices and dessert. However TAKE CARE as there was a chicken or meat dish on the menu. The one thing that lets the place down. They are not 100% vegetarian and some dishes contain onion and garlic. Salads and potatoes are available. Soups contain onion and garlic unfortunately! Still, a good options to get fresh and raw healthy vegetarian meal. 🙂 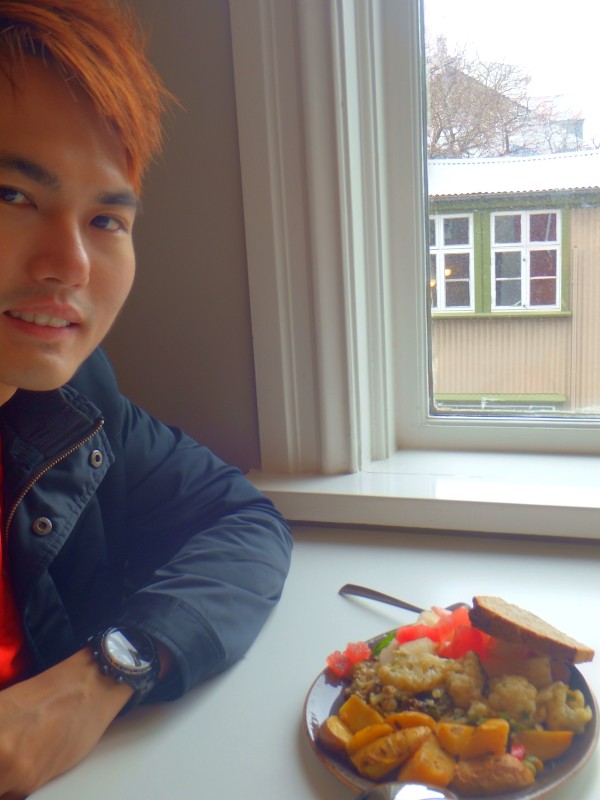 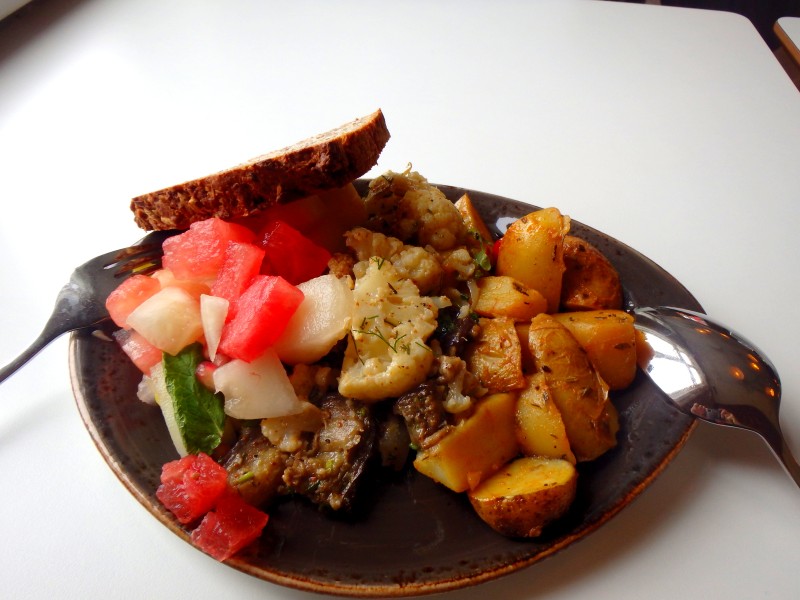 Walk down the main shopping street from the church, Skolavordustigur. Keep going- eventually on the LEFT side of the street, there will be a turning called ‘Bergstadastraeti’ with a shop called ‘Lundinn the Puffin’. Walk BEHIND the puffin store, If you reach the end of the road and meet Laugavegur- you’ve gone just a bit too far!

Given the lack of vegetarians in Iceland, it is great that they have this place! I had a spinach lasagne which was great (and healthy!) and also had a curry platter, loved both meals. Expensive (but everywhere in Iceland is) but the portions were great for the price in my view. They did also have a vegan treat/cake of some sort on offer. Lovely staff, highly recommend stopping here- plus it was always busy with locals, surely a good thing. 🙂

Somehow, it feels like fine dining cafe when I was having my meal there. Nice ambience and beautiful scenery with delicious Icelandic food. What else can you ask for? 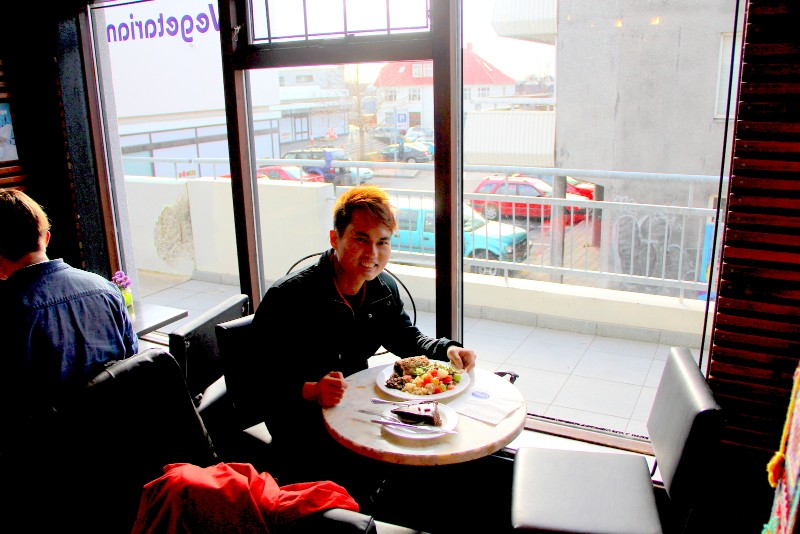 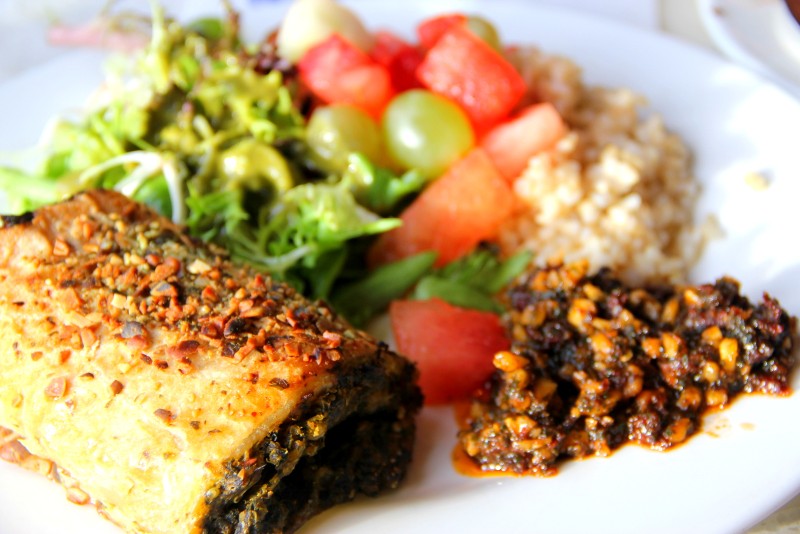 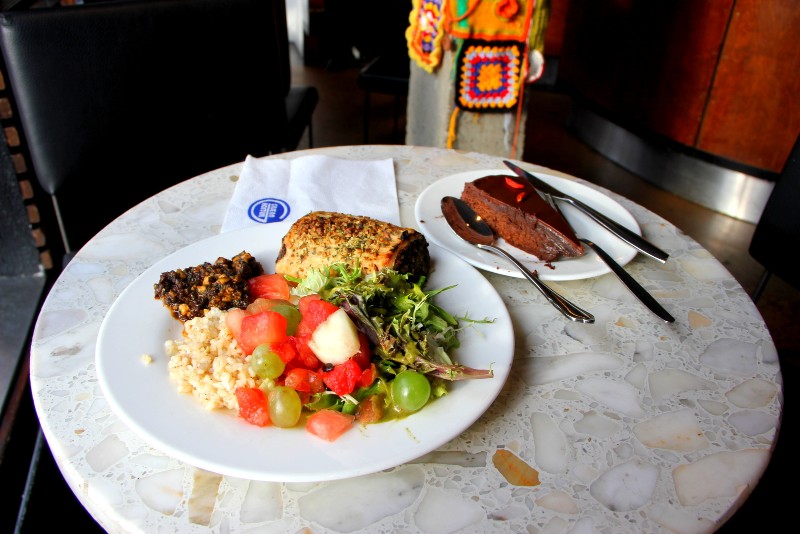 First of all, northern lights are (usually but not always) green lights that can be seen from places in the far north such as Iceland, Scandinavia, Alaska and northern parts of Canada. Because of their nature it looks like the lights are moving around the sky, dancing if you will, and it’s a pretty spectacular sight. I heard from some locals, in Chinese and Japanese culture it’s believed that a child conceived under the Northern Lights will be blessed with good fortunes.

The official Aurora season in Iceland is from October till March but like with so many other things that have to do with Icelandic nature it’s not something you can say with any certainty. For example, the first Northern Lights of the season in Reykjavík this year were seen around the middle of August. The ideal conditions to see them are when it’s cold and dark outside and the Aurora activity is high.

So I was very fortunate to be able to catch a glimpse of the northern lights as there was a huge solar activity or wave from the sun. That night was particularly cold and unbearable. As that was not in the “season of northern lights” there wasnt any tour operator going out away from the city to see the lights. Monitoring the northern lights forecast http://en.vedur.is/weather/forecasts/aurora I know that night is my only chance and in the city!

Some tips I have gotten from my Icelandic friend, if you’re going to want to photograph them, you’re going to need: A camera that can work in manual mode, a tripod, remote timer, fastest lens you can get your hands on (f/2.8 or faster preferred, but any will work). Get the camera on the tripod, set the ISO to the highest your camera can handle without significant noise (this is typically around ISO 1600), open your lens up to it’s widest aperture and start exposures off at around 5 seconds and and up until you find the sweet spot. Typically you don’t really want to go longer than 15 or 20 seconds as the motion in the aurora will blur in the photograph.

Unfortunately, I didn’t bring my tripod with me for this trip! Yes, my bad! I regretted! So that’s my best photo I have got! 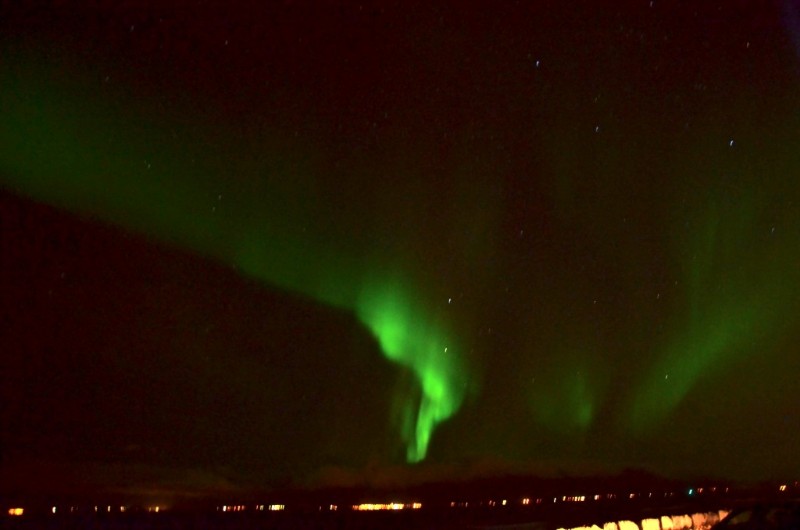 Reykjavik in a nutshell

Reykjavik is an amazing city, small and charming. Perhaps I am from a tropical climate, my personal opinion that the Icelandic 10 minutes weather is a little unbearable (heavy downpour of snow –> hailstones –> rain –> sunshine –> cycle goes again). But Reykjavik is a charming city, I am referring fog on the bay, lush green fields and the Reykjavik city scape set against snow capped mountains. That’s the view you will get to see ONLY in ICELAND! 🙂

The Underworld Caving at Leiðarendi, Iceland

A Look Behind The Wall of St Petersburg,...

A Look Behind The Wall of St Petersburg,...

How You Can Conquer 10 Things In Edinburgh,...